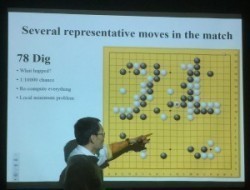 The Google company has made many advances in technology over the years in how we look at the world around us. Who would have thought that eventually they would come up with artificial intelligence, surprise! A couple of years ago, Google acquired an AI company called DeepMind and last year unveiled its new program: Alpha Go AI, an artificial intelligence program designed to play the ubiquitous Go game popular in many Asian cultures. Alphao Go made International news last year in a landmark competition in March 2016 when DeepMind had its AI play against world time Go champion Lee Sedol from South Korea and beat him 4-1 in a five match game, the first time a person was outwitted in Go by a machine!

The online science magazine New Scientist mentioned this accomplishment in an article last year. Now the magazine, among many news channels today, have announced some more exciting news…AlphaGo has actually been winning more Games…incognito.

Timothy Revell, writing in the New Scientist today, just announced that Demis Hassabis, the founder of DeepMind, tweeted that the company has been using AlphaGo to play against other masters of Go on an online Go website called Tygem under the pseudonym “Master”. The company plans to actual go through with more “official testing” to put their AI to work.

So its another big step for artificial intelligence. Better hone in on our Go skills as AlphaGo is stepping up its game!

(The picture featured at the top is of instructor Dr. Zhiping You leading a lesson on strategies in playing Go at last year’s 2016 Georgetown Summer Camp with Areteem Institute. He also discussed artificial intelligence and the famous match between Lee Sedol and the AlphaGo AI).